Old bikes are fun but have a tendency to be off road for fettling or too valuable to risk for touring and the like. So I succumbed to the lure of a modern bike and got my hands on this Honda CB1100A. I was originally going to go for the really new ’14 model – the EX – but Honda GB in their wisdom decided to import just over 60 of them into the country. That was less than one per dealer and the one my my local dealer (Honda of Bournemouth) got was sold before it was even out of the crate. They apparently had quite a few people interested in the EX but when they rang me to say it had arrived so I could go over and have a look I was busy and another chap went right over and bagged it. Which peeved me at the time – with Honda GB not the guy who bought it, good luck to him – but it all worked out nicely in the end. As they’d definitely have been able to sell at least two EX’s – one to me and one to the chap who did get his hands on it, and possibly more – I suspect Honda GB got their sums wrong on this one.

A couple of weeks later I got another call to say they’d had a ’13 model traded in so I went to have a look and decided to grab it. It had less than 3k miles on the clock and looked like it had never been out of the showroom. I had been thinking of getting a Hinckley Bonneville but decided this would be more interesting. I’ve had plenty of twins but for some reason the UJM experience totally passed me by back in the 70’s and 80’s when this style of thing was pretty much the default so I thought it about time I tried it out. And it’s really good fun.

This kind of bike hits all the right notes as far as I’m concerned. It looks like a proper bike instead of a Transformers toy. It’s in a fairly low state of tune so the powerband is basically the rev range. It’s not too heavy or too tall so it’s relaxing to ride at any speed.

Any sports 600 could doubtless leave it behind with ease but in the New Forest where I live you don’t really have much need for ultimate performance – the suicide ponies and deer tend to put a limit to silliness – so it does all I need and more. 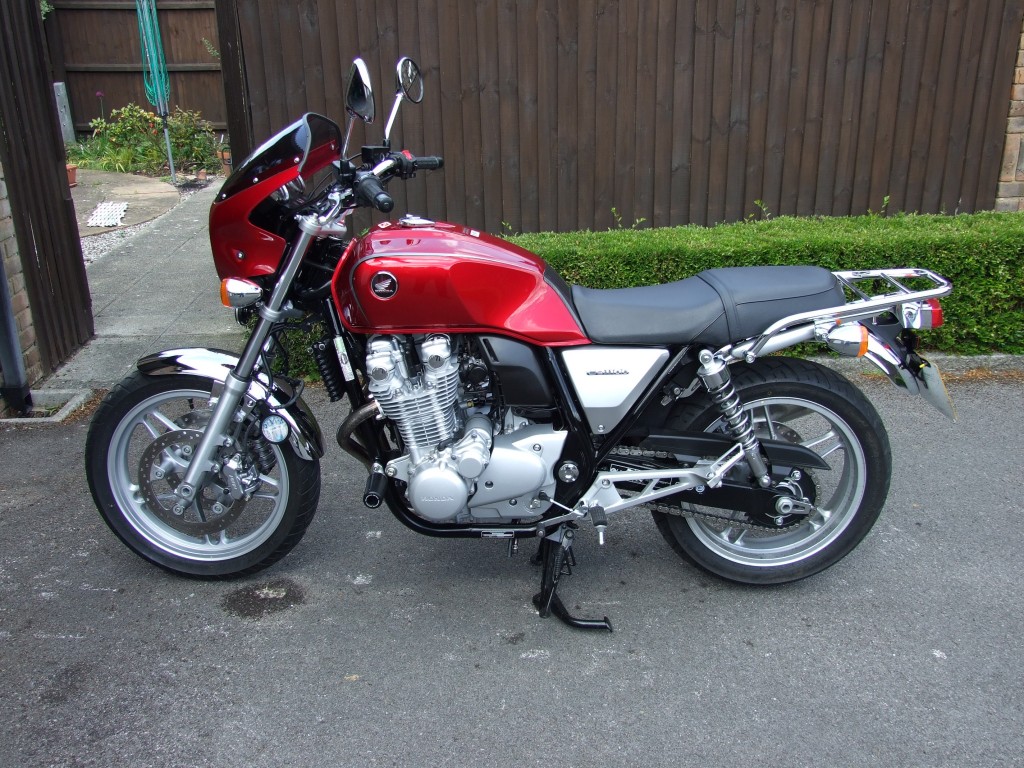 Back in 2014 I parked the bike at a cafe and went to look at a nearby bike shop. Came back just in time to see a DHL driver, who obviously thought mirrors were just for decoration, reverse into the bike and knock it onto its l/h side. Fortunately as I was there, along with other witnesses, he wasn’t able to leg it so the bike got fixed up on their insurance, not mine. In the process, due to a mix up on the Japanese website from which the nose fairing had to be ordered as it’s an import, I got a slightly different paint style.

Now knowing a bit about the process of importing bits from Japan I thought I’d do a bit of updating of my own. The red tank and silver side-panels doesn’t look bad but I always thought an all red look would be better. And the plastic chainguard somehow didn’t look right. Replacement items were ordered from Samurider giving the bike a new look. 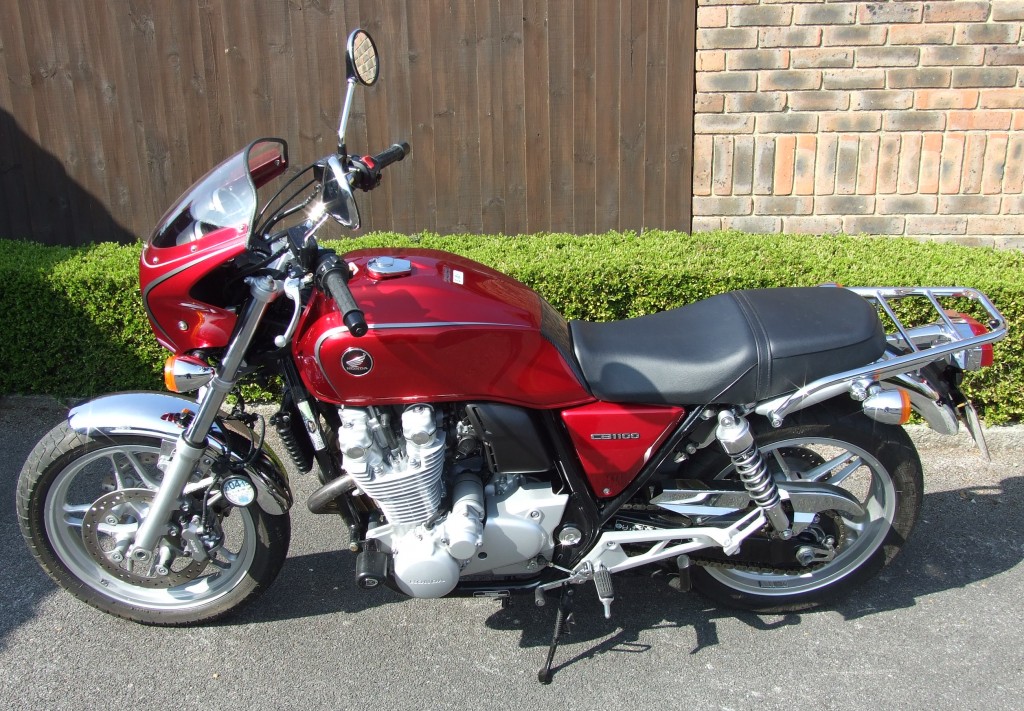 As the insurance company didn’t want the old bits I asked the dealer if I could have them instead of them going to a breaker. They were kind enough to oblige. What I really wanted was the old fairing as there was just a scratch on it so at some point a custom paint job might be in order. But the sent everything and after chucking the irretrievably broken bits I was left with the following collection of slightly scratched stuff. 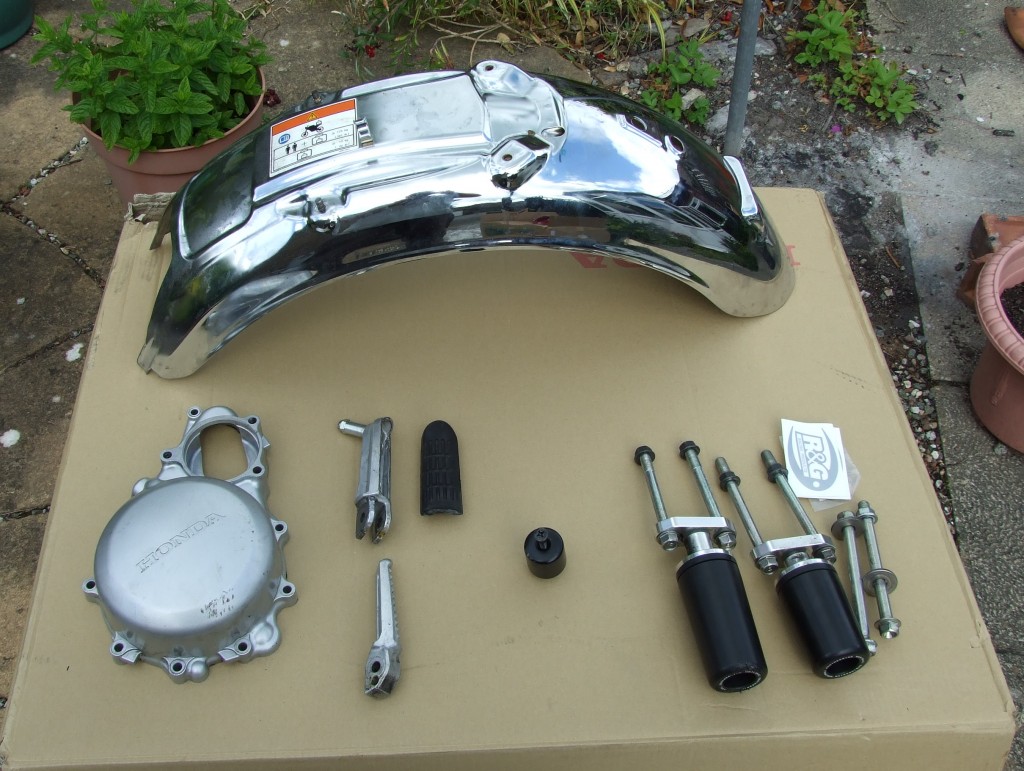